At present, the products of the village are not only famous for the variety and variety of quality and sophistication, but it is also the salvation to create jobs and income for the majority of agricultural laborers in the commune.
Through many years of trying, in July 2004, Do Xuyen was honored to be recognized as a traditional craft village. The commune has 1,131 households, there are over 900 households making bamboo weaving. Although it is a secondary occupation, now knitting has attracted more than 2,000 people of all ages. People, young and old, boys and girls are very passionate and make the most of their free time to split nan, knitting cork ”.

Visit Ms. Ha Thi Son's house in zone 5, it was over 11:00 PM that she and her husband were still busy with their unfinished cork. Talking with guests, but Son's hands are still "furry, double-haired" on the leaves: "My husband and I are more than 50 years old, but weaving has been with us for 40 years. In my village, in the past, children were about 7-8 years old, they learned their parents and grandparents knitting. We grew up with the crouching and sloppy cicadas, sounding like a little bit of rhythm and the rhythm of turning up and down rhythmically. Taking advantage of leisure time, my wife and I are knitting and sometimes forget to eat and forget to sleep.

Son's family is just one of hundreds of other families in the village who have regular income from knitting. For many families, such contributions have contributed to the vitality of a craft village. Not only at such a decent income, stemming from the market's demand, many households in the commune had ideas to expand production scale. From knitting carpentry sheets to formwork lining households in communes and districts in the province, there are now 3 presses production facilities in the commune for the provinces. 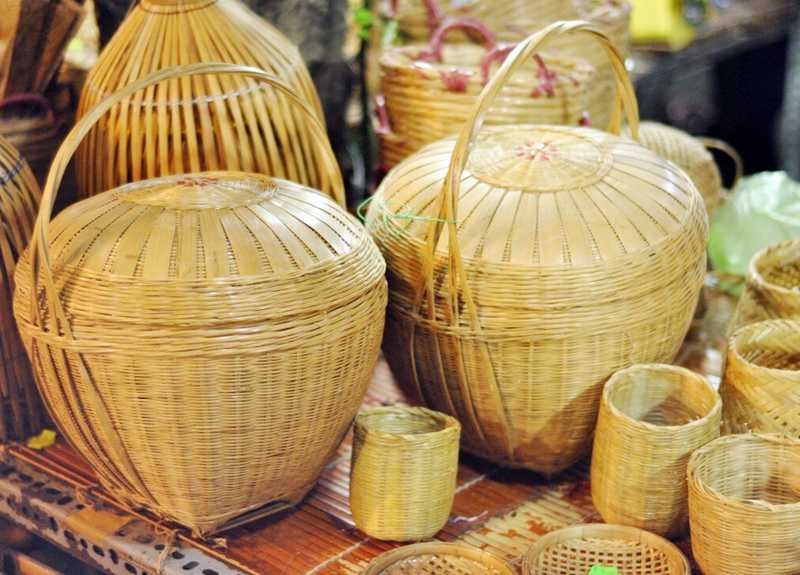 Arriving at the craft village, Do Xuyen asked Duc, "cot", perhaps everyone knows because he is the owner of a famous bamboo-pressing business in the commune. In order to facilitate the consumption of products for people in the commune who do not have to go far away to sell goods and also for profit for their families, with their own capital, in 2005 Duc invested over VND 100 million to buy a press machine. cot. He bought the grass carp from farmers in the commune, then proceeded with the production process to keep 2 pieces of carpentry sheet after being impregnated with chemical glue, then put it into a press machine. Each month, his production facility produces about 2,000 corrugated iron sheets, with a total turnover of about VND 100 million / month. In addition, his production facility has created regular jobs for 6 employees, with a salary of over 1 million VND / month. In order to serve the transport of goods and business, Mr. Duc invested in buying 2 cars worth over 1 billion VND. Currently, his pressed bamboo products are available in provinces and cities such as Hanoi, Hai Duong, Vinh Phuc, Yen Bai ... Not only stopping there, he said: "Due to the pressure of the orders, so in the coming time, he also plans to expand production scale, invest more machines to produce and trade and constantly expand relations and expand product consumption market ”.

Continuing to improve the trade name of the craft village, in 2003, the village had an additional lacquer export job, developed in parallel with the weaving career. Realizing the potential of skills and abundant labor resources, the commune also collaborated with Hon Ngoc Vien Dong (Ha Noi) to open a Do Xuyen lacquer factory. On the first day of establishment, the commune sent nearly 10 people to the craft village in Thuong Tin district (Hanoi) to learn more about lacquer. After returning, he taught hundreds of other workers. Since then has attracted an average of about 50 employees, with a salary of 800-1.2 million / month.

Meeting Mr. Phan Van Dinh - In charge of Do Xuyen lacquer production workshop, he said: "Since our production factory was put into operation, there have been hundreds of different products exported to date. foreign. It is worth mentioning here that most of the product samples are created by self-made knitting workers and sent samples to display at the fairs of handicrafts in foreign countries. After being favored by customers, they will send the order form back to us. Up to now, there are about 1,000 products with various models exported to Eastern Europe and EU countries. Visiting the workshop, talking to Mr. Vu Ngoc Vinh working at the joint team of the workshop - a skilled worker and also one of the first people to go to Hanoi to learn the craft of lacquer. He said: “Due to the traditional weaving platform, the access to this lacquer craft is not too difficult for me because basically the frame of lacquer products is still grafted from bamboo and wood. Most importantly, the technique of painting, grinding and decorating patterns is not too complicated. So we can handle all the steps to make the finished product. ”